I hope everyone had a lovely Valentine’s Day yesterday, I know I did despite a little pre-V-day stress and a last minute change of plans. The original idea you see, was to go out and have a romantic dinner just the two of us, but a culmination of things turned that into a less then stellar plan. So instead I decided to invite some close friends over for a Valentine’s Day Dinner Celebration which turned out to be a very successful good time, despite the before mentioned stress.


The stress as it were, was all due to the fact that I wanted to make the perfect Valentine’s Day dinner, and I wanted it to reflect the colors most commonly associated with Valentines, as well as the spirit of love. I searched and searched and searched through all my cook books and the web for recipes I had not yet made that would fit both my criteria and my budget. What I found was an endless supply of dessert recipes and nearly as many cocktail and appetizer recipes but hardly anything suitable for a main meal. It must also be said that there are WAY too many people out there who consider marinara sauce to be an appropriate expression of love. Spaghetti and marinara for Valentine’s? No thanks.


What I really wanted to do was utilize the beets that were in my fridge. I bought a bunch that I’d planned to use this week and I thought what better time to use them then V-day? Except virtually every beet recipe I came across was for roasted beets. Let it also be said that apparently when it comes to the beetroot most people are seriously lacking in imagination! Roast beets are great, I adore them, but there isn’t anything fancy, romantic or even particularly thoughtful about them served alongside something else.


The other challenge was the fact that I was cooking for others. Whenever you cook dinner for other people you always have to be mindful of their taste preferences. If someone doesn’t like spicy, or a certain vegetable or this or that it can set the whole thing off. You have to be conscious, and also when cooking for others you want to enjoy their company not spend the whole night in the kitchen. Which means you have to pick a dish, or dishes that are both simple yet elegant. Not the easiest task in the world. Finally I decided to stop worrying, forget looking for the recipe of another and just go with my gut and do what I felt was right. In the end it worked out beautifully, much to my own surprise and amazement, but before I get to the main course lets start with breakfast shall we?


For breakfast I made the Banana Split Waffles from "Hearty Vegan Meals for Monster Appetites" by Celine Steen & Joni Marie Newman. Served with Chocolate Sauce, Rice Whip, Maraschino Cherries, and Soy Delicious Purely Decadent Cookie Avalanche Ice Cream. The authors recommend you serve these waffles with their recipe for Cake Batter Ice Cream, and as much as I would have loved that I honestly wasn’t about to dig out my ice cream maker just to make a batch for breakfast. Not to mention the fact that there isn’t room in my freezer for the ice cream maker anyway. We searched high and low for vegan cake batter ice cream at the store, but not finding any my husband picked out this flavor for the waffles. It was definitely tasty! A good choice. As for the waffles they were delicious! Full of flavor and filling and they tasted amazing with ice cream and whip. Never in my life have I had such a combination, and certainly not for breakfast but it was a nice treat. Except I’m the sort of person that while I have a serious sweet tooth I can only take so much sweet and so much chocolate in one sitting before I want to puke. By the time I got to the last of my waffles I was in that mode, and couldn’t finish off the last couple of bites. Sugar overload.


With a breakfast like that under our belts there was absolutely no room for lunch. I did however make a lovely appetizer to proceed dinner. The Caponata from "The Mediterranean Vegan Kitchen" by Donna Klein. Garlic, onion, tomatoes, celery, capers, olives and eggplant are cooked down with water, tomato paste, sugar, red wine vinegar, and basil to make a delicious sweet/tart antipasto for toasted bread rounds. Absolutely incredible mix of flavor and the four of us went through 2 loaves of French bread in an attempt to finish off ever last morsel.


After that, dinner. Seeing as how I’d made the caponata to start I figured I might as well keep with the Italian theme and so I decided on pasta. I made a lovely Rotini dish with roasted beets, spinach, sun-dried tomatoes and red onions. Keeping with the color theme of Valentine’s I really wanted to use pink, purple or red foods, but decided at the last minute to throw in the spinach for some added "POP" and nutrition. Thanks to the beets the pasta was stained a lovely shade of pink, which really made it feel romantic and fitting for the day. As for the recipe I promise to post it later.


After a long period of digestion it was time for dessert for which I’d made the Chocolate Cherry Cheesecake from "Party Vegan" by Robin Robertson. This cheesecake was delicious, very rich and very creamy, but - at least for me - it’s not the kind of thing you want to over-indulge in. The cake was very sweet, and very chocolaty so much so that by the last few bites I was beginning to feel a little ill. Chocolate coma for sure. Everyone loved the cake though, and seconds were had. My only complaint about the cake is that I thought it should have more cherry considering it’s called a Chocolate Cherry Cheesecake. Cherry Jam is spread in a thin layer overtop of a chocolate cake and then the cake is dotted with fresh cherries - or in my case maraschino since I didn’t have fresh - but I thought it would have been better to also blend some of the cherry jam into the batter, or even a few whole cherries. That’s just me though, everyone else seemed to love it as it was.

To drink we stuck to water and Republic of Tea, though I’d originally planned to make cocktails I’m glad that in the end I didn’t. The Plum Berry White tea and Rose White Tea were the perfect accompaniment to dinner and a great way to end a good evening.

After our guests left there was some very lovely cuddle time and then a viewing of the film "I Love You Phillip Morris" starring Jim Carry and my all-time favorite actor Ewan McGregor. It’s a film we’ve seen before, and while it is a rather unconventional romance it is still a romance nonetheless. If you haven’t seen it you should! The perfect end to a perfect day, I hope you all had a lovely time as well, and stay tuned for that Rotini recipe! 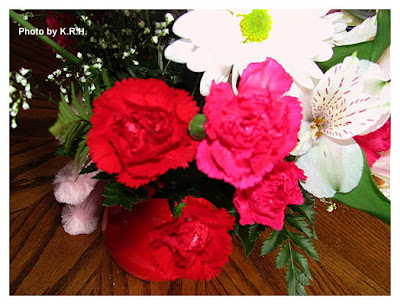