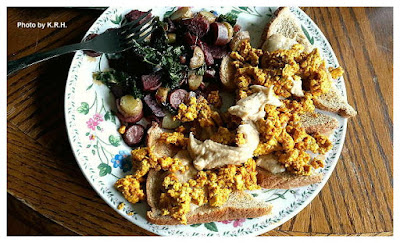 The 25th of August was me and my Husband’s anniversary, and though our celebration was pretty low key this year we did start the day off right with a delicious breakfast. I didn’t go all out this year as I tend to do some years because I didn’t get home from work until 8am and then we had a little overnight getaway planned. I chose three simple - yet tasty - dishes from my new copy of Mastering the Art of Vegan Cooking by Annie and Dan Shannon (of Betty Goes Vegan fame)

A combination of something savory and something sweet sounded just right to me and so I started with the Cinnamon Peach Skillet Rolls. Yes, these are exactly what they sound like, Cinnamon Rolls filled with sliced peaches with a peach glaze. Oh my god! I don’t know why I don’t make Cinnamon Rolls more often! They are a bit time consuming but always so worth the effort. Unfortunately my cast iron skillet wasn’t near big enough to accommodate the rolls and so I ended up just baking them in a glass dish, but that’s okay, they were amazing regardless. We each ate 2 right out of the gate, and they didn’t survive longer then a second day, that’s how fantastic these were. 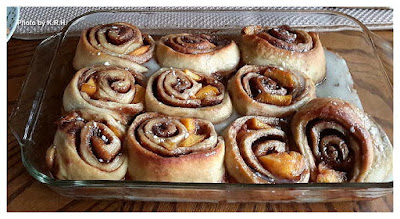 For the ‘main’ course I made the Tofu a la Goldenrod which is a simple plain seasoned tofu scramble served over toast and drenched in a milk based gravy. It probably sounds weird, and if you’re like me you might even think that sounds slightly disgusting, but trust me, it was soooo good! The only reason I even made it was because it was simple and I thought I could at least utilize the tofu scramble even if I wasn’t interested in drenching it in gravy but I’m really glad I took the chance on this dish as it was super filling, and so unexpectedly wonderful. I loved the flavor combo of the tofu, the toast, and the savory gravy.

As a side I made the Roasted Red Flannel Hash, which is a standard Hash of potatoes and beets baked in the oven with red onion and some spices, there’s even kale thrown in there for good measure. This was pretty good too, though I thought it could use a bit more salt, but that’s me. 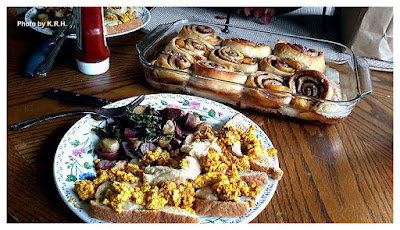 It was a fantastic way to start our anniversary, and the perfect opportunity to try out some new and interesting recipes.
Posted by Kyleigh at 11:10 AM No comments:

I can’t believe my last post was in May. I haven’t been a very good blogger lately. I always want to post, but, the truth is that when I started this blog I had a very empty plate, and these days my plate is pretty full. I hate the “I don’t have time” excuse when other people use it, but I don’t really have a lot of ‘extra’ time these days, or at least, I don’t want to spend what limited extra time I have cooking or blogging. I still do cook of course, but what I mean is that I don’t really cook that many things worth blogging about. I make a lot of the same meals, or just cook things from cook books and while that’s fine once in a while, I originally intended this blog to be one of creative original recipes, not a blog of other peoples recipes. So, even when I have the time I haven’t really got the creativity or the drive to do it, for that I feel bad because I know a lot of people enjoy the blog, but until I find a way to balance blogging with everything else in my life sporadic posting will be the norm.

Having said that, I did decide at the last minute to participate in Vegan Mofo. It’s really one of my favorite events and I have so much fun doing it. I was really bummed last year about not being able to participate but we were in Ecuador and Peru for most of September and I just wasn’t able to blog. This year we will be going away at the end of September again - Road Trip of the Pacific Northwest - but from September 1st to the 20th I’ll be posting. I normally do two posts per day during Vegan Mofo, but this year due to my own limitations I will only be posting once per day for a total of 20 posts. As for a theme, I haven’t fully decided on one yet. But I’m kicking around two ideas in my head.

Either I’ll do my usual ‘cooking the books’ theme in which I cook recipes from cook books I don’t often use, but with an emphasis on Fall or Harvest Flavors - since fall is nearing.

Or I’ll veganize recipes that originate in countries to which I have traveled.

So stay tuned for all the Mofo Madness beginning September 1st
Posted by Kyleigh at 4:31 PM 1 comment: