After the gluttony of Christmas Eve and Christmas my husband and I are normally too full and tired to do anything for Boxing Day. Which is okay with me. This year however I went a little overboard with plans for delicious Christmas Day appetizers. I overestimated my ability and underestimated my time. In the end I wasn’t able to make all of the things I’d initially wanted to, but some of them were already half prepared and sitting in the fridge. So not wanting to let anything go to waste we decided to have a mini mid-day feast on Boxing Day this year.

One of the things I was most excited about were the BBQ Chip Crusted Tofu Bites from Lane Gold’s book “Vegan Junk Food” I’ve been wanting to make these for a while and it just seemed like the perfect omni-friendly finger food. Too bad the omnivores didn’t get any, since it was only my husband and I on Boxing Day. These were actually very simple to prepare. All you do is cube tofu, dredge it in cornstarch, make a batter with flour and water then dip them, then roll them in crushed up BBQ chips. Then you fry them in a deep skillet. To some it might sound strange, to some it might sound gross but trust me, these were incredible! My husband and I couldn’t stop eating them. Since the tofu is first frozen, then thawed, then fried I thought the resulting texture was very ‘chicken’ like, in fact these reminded me a lot of chicken in flavor as well. Since the bites are fried they didn’t have an overly BBQ chip taste, it was more of a subtle sweet, tangy spice which was perfect. We served these with the Creamy Vegan Ranch also from “Vegan Junk Food” which I’d mentioned us having on Christmas Day with the hot wings. Next I made a recipe that I’ve been dying to make ever since I first got the Jenny Engel and Heather Goldberg’s book “Spork-Fed” It’s the Pear, Fig and Sage Tarts with Roasted Garlic Aioli. These have always appealed to me, and for every party I consider making them but my natural aversion to working with pastry dough and puff pastry always makes me second guess myself. Not this year though, this year I was determined to try all those things I normally put off trying do to my perception of their difficulty. Surprisingly this was actually a very quick and easy recipe to make. It came together fast, and though there are only a few ingredients these little puff pastry bites tasted amazing. So full of flavor! I was so happy that I finally got around to making them. The sweet pears combined with the earthy figs and the tart and tangy aioli provided a truly wonderful flavor combination. 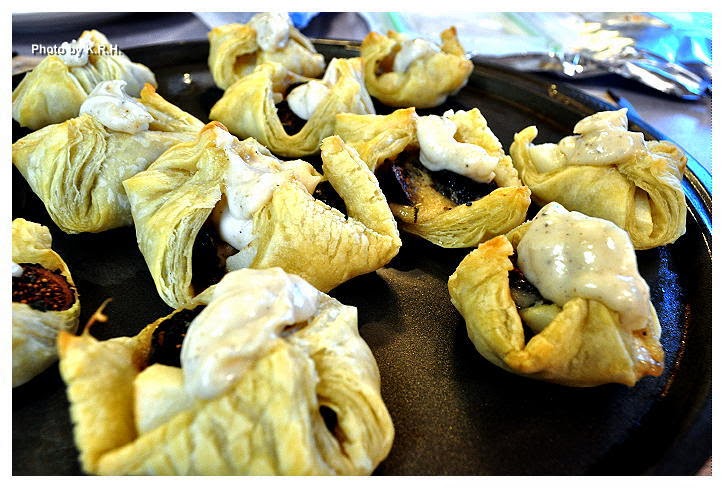 Next I made the Coconut and Lime Sietan Skewers also from “Spork-Fed” I’ve been wanting to make these for quite a while too and just never get around to it. I so rarely have occasion to make appetizers for just my husband and I that I normally skip over the appetizer section in most cook books. This too was a super simple recipe to put together. Though it requires the advanced prep of making seitan - unless you use store-bought. I decided to do home made seitan and made a batch of Thai inspired seitan sausages a few days earlier. Since I cooked the sausages by steaming rather then boiling I thought sausage shapes would be easier to steam, and easy to skewer. Otherwise I may have just done chunks which would have looked more authentic. Of course taste is the most important thing and these tasted pretty damn good. They weren’t my favorite but they were good and my husband loved them. My favorite thing about them was the super simple coconut milk, and lime marinade, and the fact that once the skewers are cooked you roll them in coconut flakes. Who doesn’t love coconut in a savory concoction? I think they would have been even more delicious with a side of peanut dipping sauce. 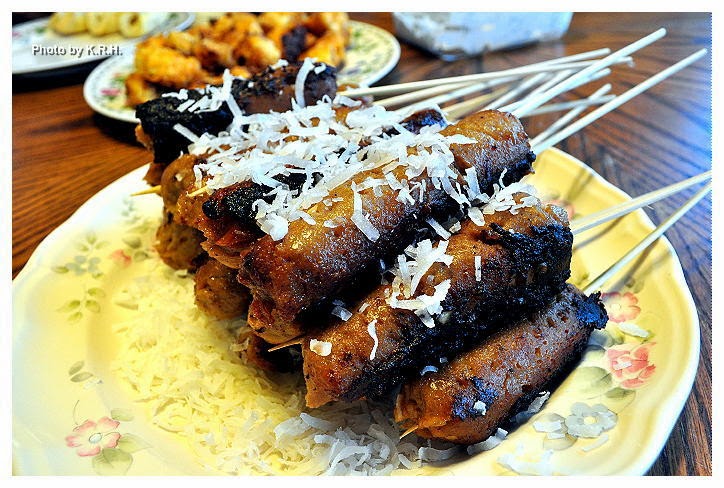 Lastly I decided to make the Seitan Baby Back Ribs from Celine Steen and Joni Marie Newman’s book “The Complete Guide To Vegan Food Substitutions.” This is another recipe that I’ve been wanting to try for years but have always found it intimidating. Much to my surprise the recipe is actually rather effortless. You make a seitan dough flatten it out into a pan coated in BBQ sauce, drench the top with more BBQ sauce and then bake. Simple enough. Once the seitan has baked you can then eat it as is, or grill or broil it to make It seem more ‘authentic.’ Since I prepared the baked ribs several days in advance I decided to pop them in the broiler for a few minutes on Boxing Day. I decided against using the optional fake bones just for convenience. Unfortunately I should have paid a little closer attention to the ribs when they were in the broiler. I left them in a touch too long and they got a little crispy on the outside. No matter though, we just cut the crispy part off, slathered some more BBQ on top and went to town.


When I was an omnivore I never much cared for pork products, but I always loved ribs. Even though I haven’t had ribs in years and don’t miss them in the slightest I have to say these seitan ribs were delicious! The texture is very close to what I remember pork ribs being like, and the flavor was fantastic. My husband and I were so full that we could only manage two thin slices each, but the leftovers made great sandwiches the next day! 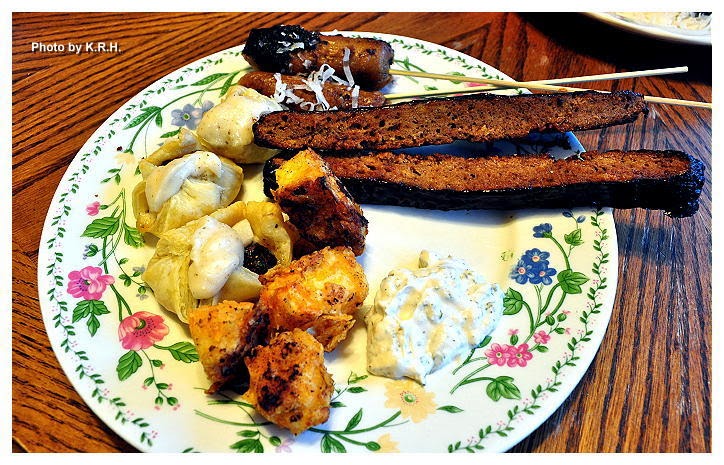 So that was our mini-feast, and after we were fully stuffed we washed it all down with a couple of beers, watched an episode of “Hannibal” and took a nice long food-coma inspired nap together. Hope you all had as relaxing a Boxing Day as we did.
Posted by Kyleigh at 10:46 AM