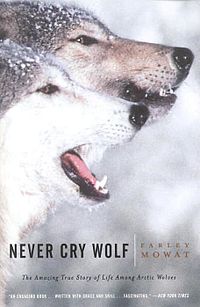 "Whenever and wherever men have engaged in the mindless slaughter of animals (including other men), they have often attempted to justify their acts by attributing the most vicious or revolting qualities to those they would destroy; and the less reason there is for the slaughter, the greater the campaign of vilification."
Never Cry Wolf - Farley Mowat - 1963

When I first read this quote, the truth of it cut so deep into my core that I had to read it slowly, four or five more times. I wanted to savor the words, and meditate on them. It’s the kind of statement - both haunting and piercing - that transcends time. For as long as the human species has been alive, and for as long as we continue to survive we have and will continue to murder out of greed and out of fear. No truer words could be said about humans, and in fact the statement is so paramount that it should be etched onto the tombstone of humanity.

Tuesday I was in my beloved local library searching through the rather large section of books that fall into the category of ‘animal science/animal behavior’ This is not a section of the library I had ever ventured to before, nor is it a subject I felt compelled to research thoroughly. That is until the winds of interest suddenly changed and I found myself blown quite haphazardly into a vast world of literature I never knew existed. Among those books I found this little gem by Farley Mowat. Knowing nothing at all about it, yet finding myself almost mesmerize by the picture of two beautiful wolves on the cover, I slipped it onto my already towering stack.
Two days later when I was trying to decide which book to read first I immediately grabbed for this one. I cracked it open, read the first paragraph and was hooked. It’s been quite some time since a book completely overtook me and this one did. I could barely put it down. I read the first 130 pages well before lunch, and finished the rest of it after dinner. I’ll tell you, that six hour break between meals was a killer. Every now and then I’d pick the book back up and read a paragraph or two before forcing myself to put it done so I could do the rest of the things I had planned for the day.

For those of you who are unaware Farley Mowat is a popular and distinguished naturalist and author from Ontario Canada. He’s written tons of books, many of which are internationally acclaimed, and two movies have been made based on his work. One of them "Never Cry Wolf" the adaptation of this book, and the second "The Snow Walker" starring Barry Pepper, which you may be more familiar with.

This book was written in 1963 and details Mowat’s experience investigating the cause of declining caribou populations in Arctic Canada and determining whether or not wolves - as Canada’s Dominion Wildlife Services suggested - were responsible. The book chronicles the time he spent living nearly alone in the frozen tundra studying the wolves, and examines his growing affection for them.

There is some controversy over how accurate or factual the book really is, some critics have called Mowat Bias a liar and worse, and in turn many of those critics have also been called the same by others. Controversy or no I could care less. Whether the book is 100% factual I have no idea, but I doubt it is. Though if we’re being honest has there ever been a biography, autobiography or book supposedly based on ‘true events’ that is 100% factual? Not likely. With books in this category a certain level of embellishment is the expected norm. Books such as these of course are meant to entertain, and life isn’t always ‘stranger than fiction’ but regardless of the books factual integrity I loved it. I loved every second I spent reading it, and I knew immediately that I’d have to discuss it here once I’d finished it.

It may sound boring to you, the premise of a man alone in the arctic tundra studying beings who can not speak as we understand it, and who can not interact in a manner in which we are accustom. You might wonder how much one could write about a baron landscape but you will be amazed. Not once was I bored, in fact I was enthralled. Mowat writes with passion, and beauty. His words are evocative and haunting. He writes with humor, and paints such vivid pictures that one could easily imagine themself inhabiting the time and place of which he writes. Mowat’s writing style is a perfect balance of lean yet detailed, simple yet complex, and his characters - the wolves - are truly magnificent creatures/creations. The wolves are so richly drawn that one almost forgets they’re wolves

Factual or not the book is peppered with penetrating quotes like the one above. His musings and observations are astute and exquisite and leave the reader with much to mull over and think about later. I still can’t shake the books imagery from my mind, and have thought about it at least once everyday since I finished it. I like to believe that Mowat’s wolves were real, and that his account is mostly true, as this book had a huge impact on how society views wolves. For centuries they were hated and feared by virtually every culture. There was a time, not so very long ago, when people were actively trying to eradicate them. Though the idea of the wolf as a ruthless, bloodthirsty savage deserving of nothing more then our contempt is a powerful one this book went a long way in transforming wolves from monsters into a cause for sympathy and compassion in the hearts of many readers. For that reason alone - at least from a conservation stance - this book should be held in some esteem.

It swiftly and ferociously plunged itself into my heart, and has become an instant favorite of mine. A book I highly recommend for it’s beauty as well as it’s perceptive observations of humanity.

"We have doomed the wolf not for what it is, but for what we deliberately and mistakenly perceive it to be - the mythological epitome of a savage, ruthless killer - which is, in reality, no more than the reflected image of ourself."