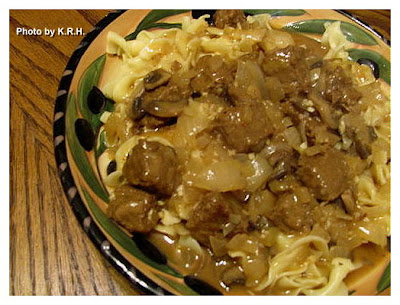 Before I get on with it I just want to say that I hope everyone had a fun and safe New Year’s, and I wish you good health and all the best for 2012! I will definitely update about my New Year’s in the next day or so.

I have never really liked beef stroganoff. In fact I don’t recall ever eating it once growing up. The dish originates from Russia, so culturally it’s not a meal any of my ancestors would have prepared, and since my mother rarely served beef while I was growing up it’s not something she’d ever cook up on a whim. Until I moved to the States, I think the closest I ever came to stroganoff was the occasional plate of hamburger helper. (Yuck!) 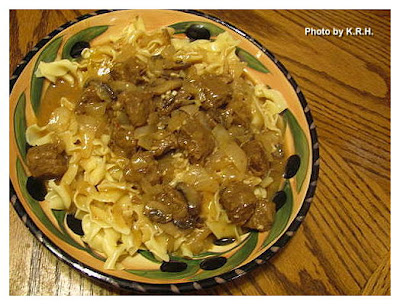 Stroganoff however was one of my husbands favorite dishes growing up. He loved it immensely, and gobbled it up with relish whenever it was served. It’s a dish that for him has a lot of sentimental value attached, despite the fact that it’s never really agreed with him, and often made him quite ill afterwards.
To the best of my memory, my first stroganoff experience was after we were married and I’d moved to the states. My mother-in-law would make stroganoff now and then, and though my first bowl of it was something short of mind-blowing I continued to eat it reluctantly whenever it was served. I don’t say that to disparage my mother-in-law’s cooking by the way, it’s just that I’ve never found the components of the dish very appealing when cooked together, and I’ve always been a firm believer that sour cream should remain cold when served. Something about mixing it into a hot bubbling broth, and mixing it with flour and greasy beef just gives me that ‘ick’ factor. 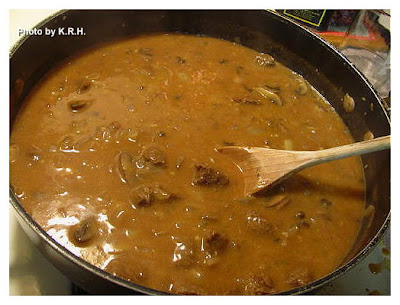 When my husband decided to join me on the vegetarian path a year ago, he let go of a lot of things. He ceased the consumption of many dishes he’d previously enjoyed, including beef stroganoff, and honestly didn’t seem all that saddened by it. He continued to happily move forward without looking back. So when I asked him just before Christmas what he wanted me to make him for his birthday dinner how could I refuse when he came back at me with "A vegan Sloppy Joe Casserole, or a Vegan Beef Stroganoff."? Though I was less then impressed with this answer, as I’m not a fan of either dish, nor does either dish really challenges my culinary skill, I did what any loving wife would do, and agreed.

Now I have never made a stroganoff in my life. I don’t think I’d ever even seen a stroganoff recipe before last week. So all I knew about it was that it contained beef, sour cream, flour, broth and that my mother-in-law always served it over egg noodles. I immediately asked her for her recipe thinking I’d simply veganize it, but the temptation to put my own spin on it was far to great, especially considering the original recipe was a little sparse. 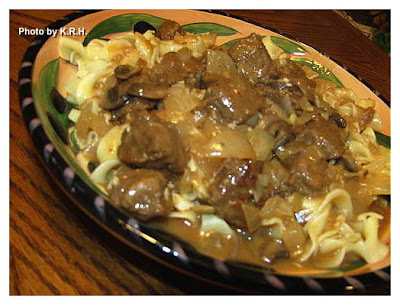 So after some careful thought, and planning this is what I came up with two days before his birthday, surprisingly it was pretty damn good, and my husband absolutely loved it. Considering this is not a dish I’ve ever liked I find it so funny that I enjoyed it enough to go back for a second bowl. Isn’t if funny how you can love the vegan version of a food you once hated?

Now a traditional Russian Stroganoff doesn’t actually contain onions or mushrooms, or garlic and tomato paste for that matter, but over the past century the dish has changed a lot. Different cultures have adapted it to suit their needs, taking things out, and putting other things in. It’s a pretty versatile dish these days to tell the truth, and in my humble opinion a good stroganoff can not be without onions, garlic and mushrooms, but that’s me. 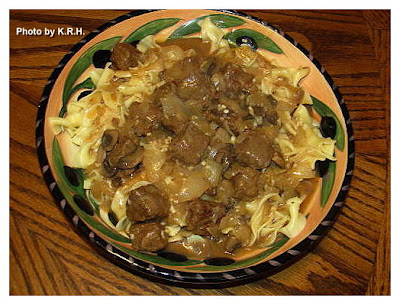 - Cook Beefless Tips according to package directions and then set aside.

- Fill a pot with water and bring it to a boil. When boiling cook Noodles according to package directions, drain and keep warm in pot.

- In same pan that you cooked tips, add 1 tsp of olive oil and Earth Balance. Heat until Earth Balance has melted and then add in the garlic and diced onion. Saute on medium heat for about 4 minutes.

- Add mushrooms and continue to saute on medium for another five to six minutes until onions are translucent, and mushrooms are soft.

- While onions and mushrooms are sauteeing, whisk together your faux beef bullion cube and water. Until dissolved or mostly dissolved.( How much water you use depends on how thick you want the sauce to be. For a thinner sauce use more water, for a thicker sauce use less water or more sour cream.) Whisk in flour, and cornstarch then add to the pan of onions and mushrooms.

- Stir in ground mustard, paprika, tomato paste and salt and pepper to taste. Bring to a low boil, then let simmer until the sauce has thickened. About ten minutes.

- Stir in the non-dairy sour cream, and mix until thoroughly combined. Let simmer another five or so minutes. Then taste for seasonings and adjust salt and pepper as desired.

- Serve hot over a bowl of noodles! 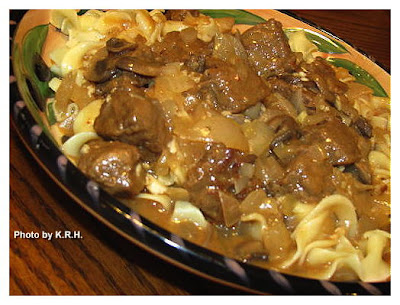 PS: I realize I promised to post this recipe days ago, but it ended up being a far busier week then I’d anticipated. Apologies!
Posted by Kyleigh at 2:26 PM