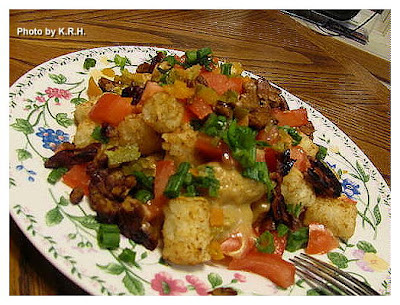 Originally I had a much bigger and more exciting post to share with you today, but in all honesty I’m feeling a little uninspired and pretty wiped out from a busy weekend of work combined with celebrating. Celebrating what? you may ask. Well Chicago’s Vegan Mania of course, and that’s what I’d intended to post about today. However it appears as though you’ll have to patiently wait at least one more day for my Vegan Mania write up, while I gather my thoughts and transform them from jumbled gobblygook to coherent sentences.

Not wanting to short change you though, I thought it only fair that I post about something, and it just so happens I had the perfect thing waiting in the wings. It’s a recipe review, and I know that after a month of Vegan Mofo you might be a bit tired of recipe reviews but trust me when I tell that after eating this dish I could not let it pass into food oblivion without at least giving it a mention. 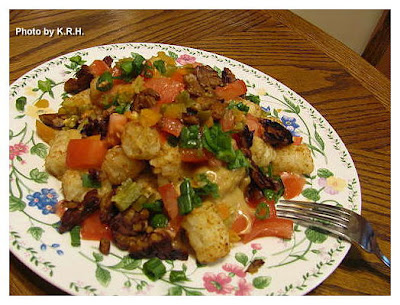 The first thing I did upon my return from vacation was go to the library and return the books I’d taken out to read on the plane. While I was there I decided to peruse the cookbook section and I just happened to come across a cookbook I’d never seen or even heard of before. The title is "Hearty Vegan Meals for Monster Appetites" by Celine Steen and Joni Marie Newman, which was published this year. I took a quick peek and deemed it interesting enough to bring home. Once I had it home however I realized that the recipes are for foods I would normally not eat, or at least not eat with any kind of regularity. As a health-nut I try to shy away from fats, sugars, and processed foods. I keep my consumption of soy-based and wheat based foods/cheeses/meats to a strict minimum and try to focus my diet on healthful foods like whole grains, vegetables, legumes, fruits, nuts and seeds in their most natural state. This book is full of recipes for what I’d call the ultimate comfort foods. However even health-nuts get a wicked craving for something decadent once in a while, and there were a handful of recipes that caught my eye. The most enticing of which was the "Irish Nachos"

Exactly why I found this dish enticing I couldn’t tell you, as the recipe contains several things I either never eat or don’t like. Tater tots, ‘fake’n bacon’ soy cream and nutritional yeast to name a few. Yet something about it just called to me. Perhaps it was the very weirdness of the dish, as you should all know by now my almost obsession with cooking things that sound utterly awful. Maybe it was my love for nachos, something I haven’t eaten in a while. Maybe it was because it reminded me nostalgically of Ireland. Stranger still since I never saw anything even remotely like this in my travels there. Whatever it was that caught my interest, Saturday night after returning home from Vegan Mania I decided to whip up a batch of these. 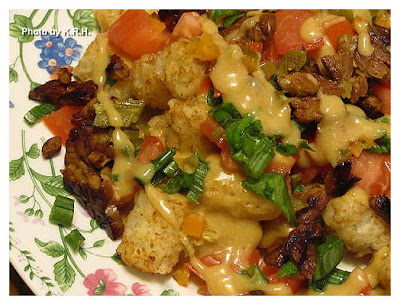 The night of Vegan Mania was probably the perfect night to make these. For one thing they were super quick taking barely 30 minutes from start to finish, and secondly I’d just spent the entire day gorging myself on all kinds of delicious food I don’t normally eat. To then go home and consume a plate of greens just wouldn’t fit in with the decadence of the day, or probably be very satisfying, so Irish Nachos it was!

I started by throwing the tots onto a greased cookie sheet and putting them in the oven to bake. Then I started the cheesy sauce. Normally I don’t like cheesy sauces that are made with nutritional yeast. I find the nooch has a weird taste to me, one I can’t quite get behind when it’s used in large quantities. It’s a little too health-foodie even for me. So I ended up using just slightly less then the 1/4 cup of nooch that was called for. I also didn’t have any soy creamer and so I used unsweetened almond milk instead. It worked really well. I added a bit more garlic powder, onion powder, and paprika then the recipe called for, didn’t add any salt but did use a bit more liquid smoke and the sauce was - impressive! I have to say it was probably the best cheesy sauce I’ve ever eaten. Though I should stress that it’s not quite as good on it’s own as it is as a compliment to the rest of the dish. It is good on it’s own, but not very cheesy. It’s once it’s combined with the rest of the ingredients that the cheese flavor really comes out. 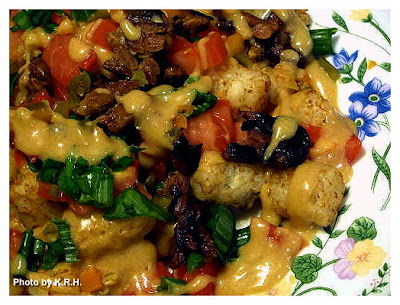 Once my sauce was finished, but my tots were still cooking I cracked open a package of tofurkey tempeh bacon and fried up about 6 slices. The recipe says to use imitation bacon bits but I couldn’t find those for sale anywhere near me. Neither was I interested in their second option which was to make their hickory-smoked breakfast strips and crumble them. Cooking the tempeh bacon was a lot faster and produced the same result so I did.

Then it was time to assemble the dish. I layered the potatoes onto a plate, practically drowned them in cheesy sauce then topped them with lots of green onion, tomato, diced jalapeno and the crumbled tempeh bacon. I totally forgot to add the sour cream - which I had, and would have been delicious - so I’ll have to remember it for next time. Yes next time, these nachos, despite all my skepticism and snobbery were freaking awesome! Even my husband thought so, and you have to understand that he didn’t like cheese before he went vegan so he’s definitely not much into vegan cheese, nor is he crazy about tater tots and only likes tempeh bacon once in a blue moon. These nachos were mind blowingly good, so much so that I knew I needed to share them with you. They so exceeded my expectations that I’m still in awe of how this dish turned out. Trust me when I say you need to try this! Lastly I’d like to add that if this dish is in any way indicative of the rest of the recipes in this book then it definitely deserves to be on your wish list, especially if you’re a comfort food loving vegan. Heck I plan to buy it and I only eat a meal like this maybe once a month. With dishes that sound as good as ‘Roasted broccotato soup with bacon-flavored chickpeas’, ‘Sweet potato po’ boys’, ‘Baked BBQ buns’, ‘BBQ slaw tacos’, ‘Chorizo and Potato Lasagna bake’, and ‘Kale bagels’ my mouth is practically watering as I type.
Posted by Kyleigh at 3:30 PM