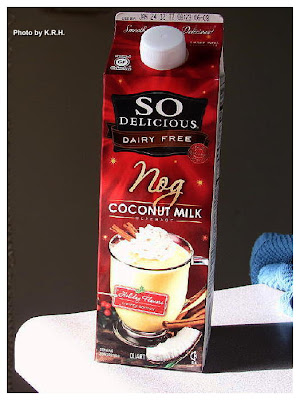 I want to take a moment to talk about Eggnog. I loved eggnog when I was a kid, it was definitely my favorite thing to drink around Christmas, and I have many fond memories of enjoying it around the holiday season. Of course that was before I knew what was used to make it - blah -and long before I ever went vegan. As I grew into my teens and then my early twenties I noticed my taste for eggnog had changed. A small four ounce glass was often more than enough to satisfy my craving for the traditional holiday drink, and any more would often leave me feeling bloated or ill. I rarely drank eggnog after I got married, mainly because my husband has never liked the stuff and with my changing tastes there was no way I could drink an entire carton myself before having it go bad. However I would still occasionally partake in a drink if someone else had eggnog available.

When I went Vegan of course I had to give up eggnog all together which honestly didn’t seem like such a big deal at the time, especially once I found out all that ‘traditional’ eggnog contains. Of course I did enjoy me an eggnog latte from time to time, or eggnog flavored ice cream, or eggnog French Toast, and every once and a while through that first holiday season I found myself growing slightly nostalgic for the beloved beverage of my childhood.

Then I discovered Silk Nog. Say what you will about Silk but I’ve always liked their products. I rarely drink soy milk these days and when I do I typically use Earth Balance Soy Milk, but Silk still holds a special place in my heart and their nog was good. It might not have been quite as thick as traditional nog but all the flavor was there. In fact it was so reminiscent of the nog I remembered that more then just a few ounces would give me that old blah feeling. That didn’t stop me however from enjoying it in small quantities all through last year’s holiday season.

This year I didn’t see Silk Nog on the shelf of my local groceries. However I did discover that Earth Balance came out with their very own Soy Nog. I promptly bought a carton and really enjoyed it. The taste and texture were very similar to the silk nog I remember from last year, and it too was very comparable to traditional nog, right down to giving me that blah feeling if I indulged too much.

By the time I finished my carton of Earth Balance nog a few weeks ago I had come ro realize something. Perhaps I don’t like eggnog as much as I thought. If I always get that blah feeling when I drink to much then maybe it’s something about the flavor itself or perhaps the richness that no longer appeals to me. Maybe my desire for nog at the holidays isn’t a physical craving at all but a nostalgic desire at re-creation. After this realization I was content to let nog go, at least for the remainder of the holiday season, and then I read Bianca’s post over at Vegan Crunk about So Delicious Coconut Milk Nog.

Now I’ve tried So Delicious plain Coconut Milk before and I honestly hated it. I thought it was terrible, and this is coming from an avid coconut lover. For whatever reason this brand did not appeal to me, and I’ve also tried a couple of their coconut milk ice cream flavors that I wasn’t particularly fond of either. When it comes to coconut milk used for drinking I much prefer Silk’s Pure Coconut Milk, or Coconut Dream. For baking, soups, curries or sauces I generally use Thai Kitchen or 365 brand. However Bianca made So Delicious sound, well so delicious. So when I saw it on sale while I was doing my grocery shopping Friday I decided to pick up a carton and give it a whirl.

This in my opinion is the definitive vegan eggnog! And from now on it will be the only one I ever purchase. This coconut nog blows all other vegan nogs, and quite frankly the traditional egg and dairy based stuff out of the universe! This nog is thick, creamy and rich, almost custard like and it doesn’t have that aftertaste that all other nogs have always imparted on me. This nog also doesn’t give me that blah feeling after I drink a glass or sneakily gulp down a few mouthfuls in the middle of the night. This is truly the perfect nog, and the best part is that it’s got just the slightest hint of coconut. That really makes this nog for me, that teeny-tiny hint. I love it. In fact I love it so much I’ve already drank half the carton since Friday, and I’m sure it won’t be long until the rest is gone.

So if you’re a former nog lover like me, or a current vegan nog fiend then give this nog a try and I’m sure you won’t be disappointed. For all you nog haters or skeptics out there I dare you to try this nog, you never know, you might come away a changed vegan.

PS: I am very eager to try the Nog French Toast recipe on the side of the carton! American Thanksgiving Breakfast here I come!
Posted by Kyleigh at 8:49 PM