The Joy of Pickling... 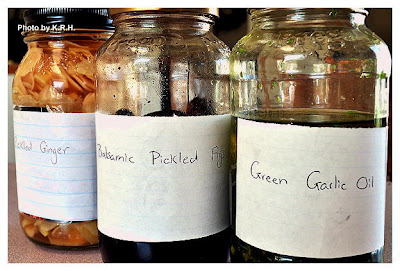 Pickling. It’s a process that’s always intrigued me, which I suppose is ironic considering I never much cared for pickled food aside from sushi ginger, pickles and pickled beets. When I first began my culinary adventures in earnest five years ago the fact that I didn’t like pickled food seemed inconsequential, I wanted to learn how to pickle. Of course back then I wanted to learn how to do everything! Everything in the culinary world was new, and amazing to me, and I wanted to achieve it all. I’ve mentioned before that I essentially taught myself how to cook by borrowing stacks upon stacks of cook books from my local library. Well amongst those stacks were several books on canning and pickling. Both practices that fascinated me.

It seemed such a quaint and old fashioned thing to do, but at the same time I thought of it as being a very economical idea. I’ve always been partial to the thought of having a pantry stocked with good, nutritious food that I’d grown, preserved and canned myself. I remember reading the Barbara Kingslover book "Animal, Vegetable, Mineral" and thinking "I want to do that!" Minus the raising and slaughtering of livestock of course. Being a passionate environmentalist I want to live as sustainable and self-sufficiently as possible, growing and preserving my own food is definitely a step in the right direction. However, five years ago when I read my first book on preserving, pickling and canning I felt a bit overwhelmed. Well overwhelmed may be an understatement. Not only was everything I was reading entirely new to me, but I didn’t understand half of it, and what I did understand sounded complicated. How could I be sure I wouldn’t die from botulism? I was neither confident nor skilled enough in the kitchen to embark on such a journey. 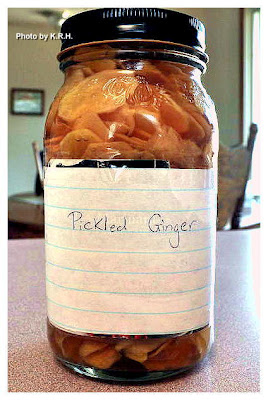 Fast forward to now. This week as I mentioned yesterday I’m eating simple, light, mostly raw foods in an attempt to re-balance my body. Flipping through my various cook books, - some raw some not - I came across several recipes I felt I absolutely must try. One of them is Chad Sarno’s recipe for Beet Ravioli that appears in Tal Ronnen’s book "The Conscious Cook." One of the components to the recipe is Pickled Balsamic Figs. Another component is Green Garlic Oil, which is essentially olive oil infused with garlic, and green herbs. I’ve been curious to try this recipe for forever but the raw aspect, combined with the pickling the infused oil and the cultured cashew cheese had me feeling a little intimidated. Until now. I made the figs and oil Monday, and not only was it super easy but I’ve already tried one of the figs and they’re delicious. I’m actually making the full dish tonight for dinner - and I’ll let you know how it turns out - but the simplicity of that one experience eased my fears about pickling.

It’s easy! So easy. All you need are some clean mason jars - or old pasta sauce jars - some vinegar, a bit of salt/sugar and whatever you want to pickle. It really is as simple as that, and I don’t know why I was always so concerned about it. I had so much fun Monday, that today I decided to pickle my own sushi ginger. I love sushi ginger so much and use it in abundance when eating sushi but to buy pickled ginger at the store is ridiculous. Almost $4 for 4oz, when I can buy 2 pounds of ginger root for less then $1 and make my own? No brainer right? So very excitedly this morning I decided to use Ani Phyo’s recipe for pickled ginger from her book "Ani’s Raw Food Asia" and it should be ready in about a week. 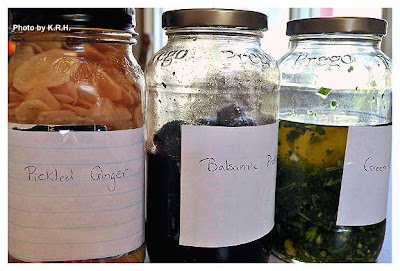 I’ve been feeling so good over the past few days that I’ve decided I definitely want to eat more raw over the summer, and I think pickling is going to be a great thing to do. Next up I’m going to try pickled daikon, and after that maybe kimchi. I’ve really gotten a great sense of satisfaction and joy out of the two things I’ve pickled so far, plus the infused oil. It’s given me a real positive lift, and it’s nice to finally be able to upcycle all those pasta sauce jars that have been floating around the house. So stay tuned for more pickling stories and seriously, give it a try yourself. You won’t believe just how easy and fun it is!
Posted by Kyleigh at 1:05 PM