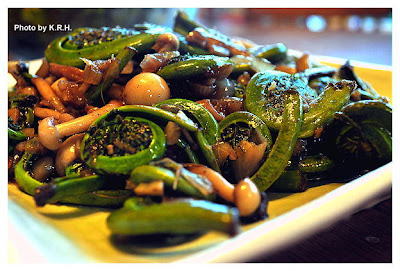 Fiddleheads are the unfurled fronds of a young fern. They are harvested seasonally, in early spring before the fronds have opened and reached their full height. I knew what fiddleheads were, and I’ve come across recipes for them before, but until a few days ago I’d never tasted them, nor even seen them in person. Apparently they are the new ‘in’ thing but I didn’t really know what all the fuss was about. So of course, when they made their appearance in my local market last weakened I knew I’d have to try them. If only to see if they lived up to the hype, and because it’s become something of a rule for me that whenever I’m faced with a vegetable I don’t know or have never tried, I must eat it. 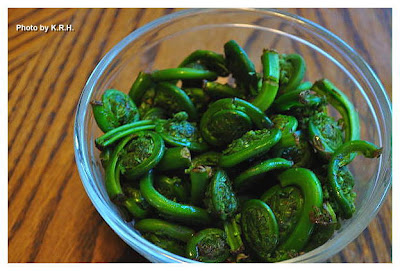 My first thought upon eating one raw was “Wow, this tastes exactly like a fern.” A reaction that my husband found greatly amusing, and if like him, you too, are wondering how do I know what ferns taste like, it’s simple. I did grow up in Vancouver after all, amongst a rich natural landscape, and I was a Tom Boy as a child. Meaning I spent all of my childhood playing out doors, especially in the woods, - of which there was no shortage in my neighborhood - and when you’re the sort of child that spends her days climbing trees, and building forts and, tree houses, you inevitably find yourself doing a bit of foraging. So yes, I’ve eaten wild ferns, and wild berries, and tons of other random, wild vegetarian. - Which by the way I don’t recommend unless you absolutely know what you’re doing! - So when I first bit into that raw Fiddlehead it brought back a flood of memories of days spent in trees, playing at being a ‘wild thing.’ I can’t say the flavor of ferns is a particularly delicate one, and it is something of an acquired taste to be sure. Cooked fiddleheads on the other hand are an entirely different vegetable. When you cook them they become far milder, almost bland, with a hint of sweetness and a wonderful chewy texture. My second thought upon eating a blanched fiddlehead was “Interesting.” my third thought was “Amazing.” Like tofu, they really soak up the flavor of whatever you cook them with, they absorb so much which I love, but the thing I love most about them is their texture. I can’t really explain it, but something about it really appeals to me. 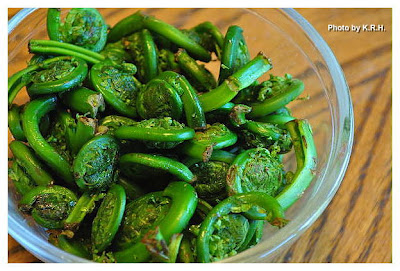 Though I wouldn’t go so far as to say they are my new favorite vegetable, nor do they even make it onto my top ten, but they are definitely a treat. A wonderful spring surprise to brighten up and liven up your palate. So if you see them, do give them a try, their season is very short so you have to snap them up when the opportunity presents itself. 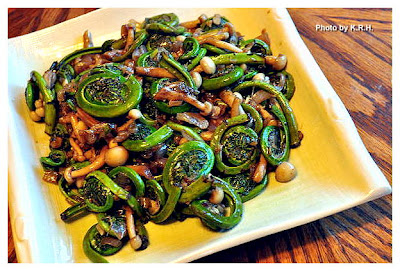 So, about this recipe, since I’d never cooked with fiddleheads before I wasn’t really sure what to do. I did a google search and pretty much every recipe I found came back using fiddleheads as a garnish to meat. A few other recipes had them thrown into pasta, and many more still had them cooked in butter with morel mushrooms. None of these things appealed to me, and none of them seemed particularly creative or interesting. However I did like the idea of cooking the fiddleheads with mushrooms. Not morels though. As it happened I still had a package of Bunapi mushrooms that I’d bought at the Japanese market, and so I decided why not try them, and do an Asian inspired sort of dish? - By the way Bunapi mushrooms also known as White Beech are a unique sort of Japanese mushroom with a crisp texture and slightly nutty flavor. If you can’t find them you could always substitute shiitake or oyster mushrooms. - I’ve also been kind of addicted to Chinese 5 Spice Powder lately, and so I thought I’d try and work that into the recipe too. In the end the whole thing came together perfectly, far exceeding my expectations. The flavors of this dish are a complex mixture of sweet, salty, and spicy, and it’s just so delicious you’ll definitely be craving more. 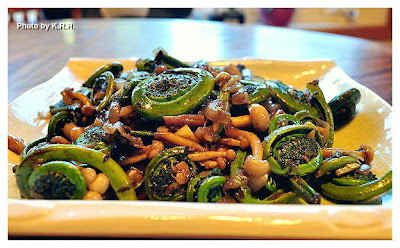 - First bring a medium sized pot of water to a boil, add the fiddleheads to the pot and boil for 2 minutes. Quickly drain and then plunge into a bowl of ice cold water to stop the cooking process. Once cooled drain the fiddleheads and pat dry, set aside on a plate.

- Heat the 2 tsp of sesame oil in a large pan over medium-high heat. Add the garlic, ginger and shallot and saute for 5 minutes until fragrant. Add in the crushed red pepper flakes and saute another 2-3 minutes until the shallots are soft.

- Whisk soy sauce, brown rice syrup and five spice powder together in a small bowl and set aside. 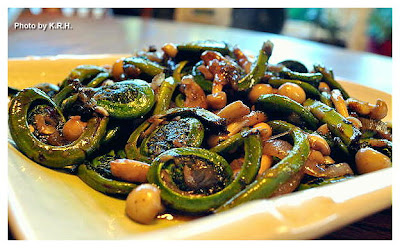 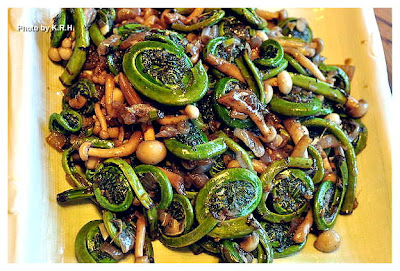 FYI - Fiddleheads are reported to be a good source of Omega-3 and Omega-6 fatty acids. They’re also high in Iron, fiber and potassium. They also have a good deal of antioxidant activity as does the bunapi mushroom.
Posted by Kyleigh at 10:52 PM