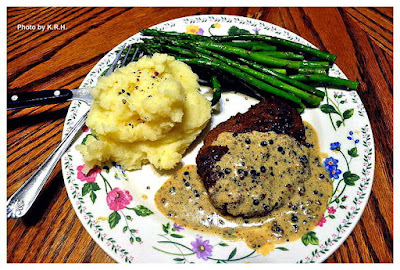 Steak au Poivre is a pretty typical French dish, and one that can be found in most traditional French restaurants. I saw it on a lot of menus when we were walking around Paris and I found the concept intriguing because I’ve never tried it before as a meat eater. I thought it might be a fun, and relatively simple recipe to veganize. The internet says the dish comes from the 19th Century, and became popular In restaurants in Normandy where men would take their women in the hopes that the peppers aphrodisiac properties would work their magic. I don’t know how true that is, but it’s a cool story. 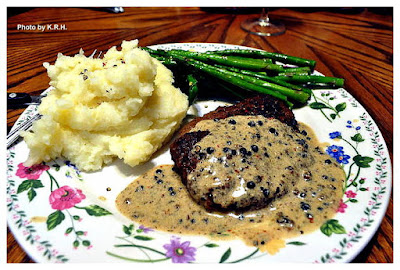 For my veganized version I decided to go with some homemade Seitan Steaks. I used Skye Michael Conroy’s Filet Mignon recipe from his book “The Gentle Chef Cook Book” because traditional Steak au Poivre used cuts of filet mignon, though I think any seitan steak would work just as well, and you could probably even use steamed tempeh for a gluten-free version, or perhaps even large portobello mushrooms for a gluten and soy free version, though obviously taste and cooking times would be different. I also decided to use a blend of peppercorns rather then just regular black pepper, and I did so because I wanted a richer more unique flavor, but any old peppercorns would do just as well I think.

Overall I think the dish turned out quite well. I was pretty nervous about the flambe because I’ve never had to do that before, and being so close to a large open flame kind of freaks me out, but I had some help with that and because the alcohol content is so small the flame didn’t get all that big. The ‘whoosh’ was kind of fun! My only complaint - okay I have two - is 1) A large dose of pepper can be quite overpowering, I ground the peppercorns by hand and I think it might be easier to grind them coarsely in a grinder, also use less then suggested if you don’t want as much heat. 2) As with before I found the texture of the seitan a bit soft for my liking, I said the same thing the last time I made the Filet Mignon and I thought that a longer cooking time would firm it up a bit but it did not. I realize traditional Filet is quite soft, because it’s served rare but I guess that just isn’t my thing. Flavor wise the seitan is great, and I recommend the recipe if you like Filet. My husband loved the dish, and so I would make it again with a few changes. Anyway, without further adieu, here is Steak au Poivre, enjoy! 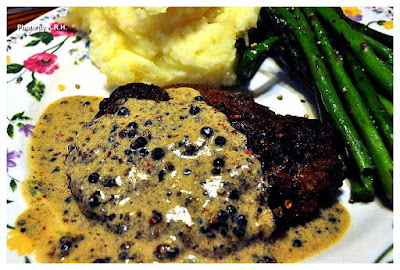 - If your seitan steaks are a bit dry rub them in enough Olive Oil to coat. Spread the crushed peppercorns on a plate and place the seitan down on top, pressing each side into the crushed pepper, use your fingers if needed to press the pepper into the steak so it sticks.

- Melt the non-dairy butter in a large pan over medium high heat. When melted add the steaks and let them sizzle. Let brown on each side for 4-5 minutes or until they’ve reached your desired brown/doneness level.

- Once your steaks are cooked to your liking add the cognac to the pan.  Using a long match, or barbeque lighter quickly (and carefully) light dish on fire. You want to make sure you light the dish as soon after adding the cognac as possible, leaving the cognac in the pan too long will result in the steak having a bitter or alcohol taste. Also please make sure you are not sticking the flame into the pan and lighting the actual food, what you want to do is light the alcohol fumes on fire. Stand a little bit back so you don’t get engulfed, and make sure you have a lid ready to throw over the pan incase things go awry.

- Once the alcohol has burned off and the flame has gone out on it’s own (it will happen quicker then you think!) Remove the steaks from the pan with a spatula and place on individual serving plates.

- Now add the wine to the pan and boil stirring for one minute to deglaze the pan.  Then add the cream and stir to combine, simmering one to two minutes or until the cream has warmed through and the sauce is combined. Taste, and add some sea salt to season, and extra black pepper If you desire.

- Spoon the Sauce over your steak, and serve with a side of steamed asparagus, and a mound of mashed potatoes, plus a glass of wine, you deserve if after your flambe experience! 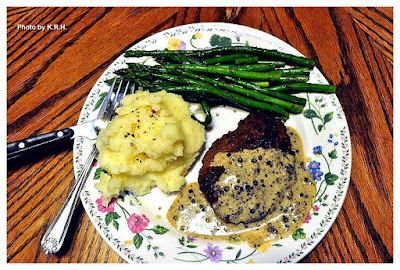 For anyone interested I lightly steamed my asparagus so that they were tender crunchy, then I drizzled them in Lime Olive Oil, and tossed them with Sea Salt and Course Ground Lemon Pepper. The Mashed Potatoes were made with Unsweetened almond milk, Earth Balance, Sea Salt, Garlic Powder and a little of the leftover crushed peppercorns. I used 4 Medium Sized Russet Potatoes, and FYI the Cognac sauce tastes just as good over the potatoes as it did over the steaks. Actually the sauce was probably my favorite part of the whole Steak au Poivre experience!
Posted by Kyleigh at 11:41 AM