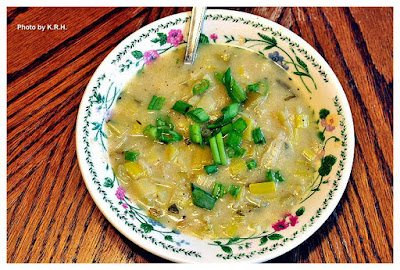 Leek and Cheese Soup is kind of like the Irish version of French Onion Soup. Quick and easy to make using staple ingredients; warming on a cold night and comforting any time of year. I don’t really know where it comes from, but it’s probably been around in one form or another for ages. All I know is that I was interested in making it from the first moment I saw it listed in an Irish cook book. 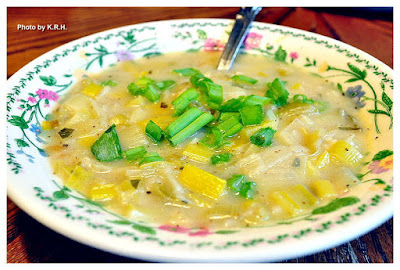 - Melt the nondairy butter in a large soup pot over medium heat. Add the Leeks and saute for 10-15 minutes until softened.

- Add in the flour and stir constantly for about 2 minutes until leeks are well coated.

- Add in the salt, pepper, poultry seasoning, and mustard. Stir to combine.

- Slowly add in the stock, stirring to blend. Increase the heat and bring the soup to a boil. Then Reduce heat, cover the pot and let simmer gently for about 15 minutes.

- Add in the cheese. And let simmer an additional five minutes. If the cheese melts and blends in so be it, but if it doesn’t fully melt it’s kind of nice to have strands of gooey cheese within the soup.

- Taste and adjust seasonings as needed. Then serve garnished with additional vegan cheese and green onions if desired, serve with a hearty brown bread that you can use to sop up the soup. 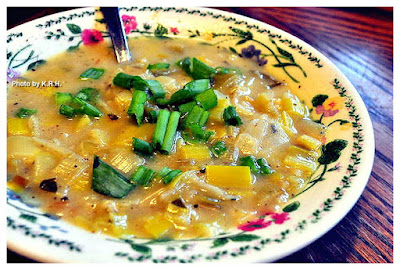 *** Note - The Original recipe uses Irish Farmhouse Cheese, and specifically suggests Cashel Blue. However you can use any flavorful, sharp vegan cheese you can find. I used Provolone. I bought the slices and just broke them up into little squares. The squares somewhat clumped together to form little cheese lumps in the soup which I liked, as it very much resembled the picture of the original soup. But, use whatever vegan cheese you like, shreds or slices, doesn’t really matter either.***
Posted by Kyleigh at 1:18 PM