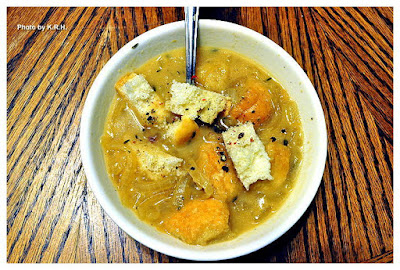 When we were in Paris we went to this incredible vegan restaurant. I don’t recall the name of it at the moment - I’ll have to consult my travel notes because I do plan to post about it at some point - but while there I had the most incredible French Onion Soup. Seriously, I’ve had some decent vegan French Onion Soup before but it never quite lives up to expectations in my opinion. This soup however was out of this world amazing! It had such a rich flavor, and I loved that instead of using Nutritional Yeast or shredded store bought cheese that they melted on top, the soup actually had slivers or shavings of vegan cheese right in the soup. Large thin squares of vegan cheese, that hadn’t melted in, but were soft and melted easily when they hit the tongue. It was such a good soup, such a different experience that ever since getting back I’d been thinking of trying to recreate something similar at home. Well, this year’s Mofo provides the perfect opportunity, so here’s my take. I think it turned out really well, though it doesn’t quite live up to that restaurant soup I had. Something tells me, no French Onion Soup ever will, and how can you really beat French Onion Soup eaten in France anyway, right? 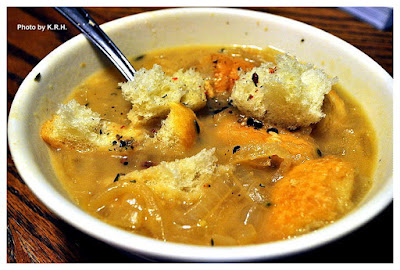 - Melt the butter in a large sauce pan over medium high heat and add the onions. Lower the heat and cook on low for about 25 minutes stirring occasionally until golden brown and beginning to caramelize. .

- Add the garlic and flour to the pan and stir continuously for 2 minutes.  Gradually blend in the stock and wine, bring to a boil.  Add the Bay leaf, thyme, pepper, marmite and season with salt if desired. Cover and simmer for 25 minutes.

- Preheat the broiler. Place the baguette slices on a broiler sheet and toast on each side for a minute until golden. Remove from the oven.

- Add the sliced cheese to the soup and let simmer for 5 or so minutes just to let the cheese incorporate and blend. It’s okay if it melts in, but if it stays in tact that’s good too.

- Divide the soup into serving bowls, break the toasted baguette into crouton sized pieces and top each bowl. Taste or seasoning and add more salt or pepper as desired. 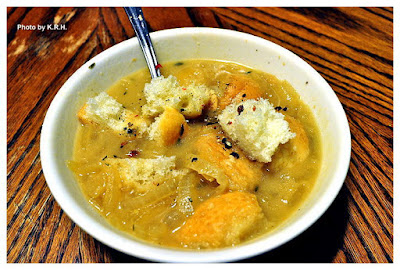 Enjoy with a glass of wine and a nice side salad.