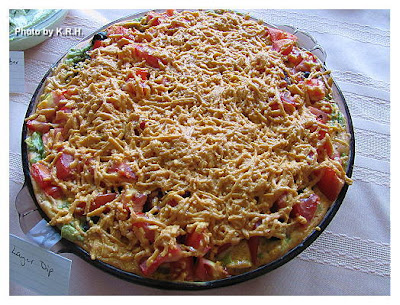 So now that we’ve gone through a few things you could make for your Thanksgiving or Christmas celebrations let’s talk Party Food and appetizers! Everyone loves a party, and people will use any excuse to throw one, but lets face it parties are often one of the hardest things to navigate as a vegan. You and your partner are usually the only vegans, but sometimes it’s just you, and before you lays a seemingly endless exhibit of animal suffering and brutality. In the form of a meat and cheese buffet. Virtually everything at an omni party contains meat, cheese, eggs, or dairy, except perhaps the tortilla chips, the salsa, the guac, and the humus.

*Le sigh* It’s always the same, you confine yourself to the salsa, and end up feeling like a sore thumb because people all around you are giving you sly looks out of the corners of their eyes. The bolder party goers will enquire "Aren’t you hungry?" "Why aren’t you eating?" "Did you try... such and such?" to which you will inevitably have to explain that you are vegan, and then be forced to witness that glassy eyed look cross your friend or acquaintance’s face. Often the look is followed by verbal confusion "What does that mean exactly?" sometimes it’ll be met with contempt. "Oh, you’re one of them." and sometimes it’ll be met with a strange mixture of misguided superiority and pity. "Oh well, I don’t know how you do it, you sure are missing out." and I know, I know! Every time you have to answer the same silly questions, and be confronted by the same silly stereotypes it’s like being stabbed in the eye, because for the love of peas how many times do you have to answer the same question?! The answer is you’re never going to stop having to answer the same questions. For as long as you are vegan you will have to continuously repeat yourself. Omnivores just don’t get it, hard-core cling to their steaks omnivores like it’s the second amendment will never wrap their heads around it, and so non-vegan parties will forever be a challenge. Even those non-vegan parties thrown by your family or good friends who are well aware that you are vegan. The truth is it’s not that they don’t care that you’re vegan, a lot of times they just forget. Veganism is something so far removed from them that until they’re actually faced with it they forget all about it. Other times they simply just don’t know how to accommodate you.

The first thing I learned when I became vegan was that going to a party, or eating at someone else’s house was going to be a sink or swim affair. Meaning, you have to bring your own food or face starvation. Since I have no intention of starving myself throughout the course of any event I quickly realized I’d need to learn to make some vegan yet omni-friendly dishes to bring to parties with me. That way I could happily eat until stuffed and not look like so much of an outcast.

Alicia’s Cheesy Oozy Guacamole Bean Dip is the perfect party dish! It’s got a rich, bold flavor, a gooey texture, and it’s something that all omnivores will find familiar. I mean, who doesn’t love a 7 Layer Dip? I know I do. It was always one of my favorite things about a party. Loading up salty tortilla chips with all those seven layers of yummy goodness. The tomatoes, the olives the green onions and of course the cheese. I knew quite a few people who made a killer 7 layer dip, and even knew of a few good store bought brands, so when I first went vegan I thought my 7 layer dip days were over. That is until I got hold of a copy of Alicia Silverstone’s "The Kind Diet." This recipe instantly stood out, I mean the picture alone was mouth watering. I couldn’t wait to try it! As I said both the flavor and texture were wonderful, exactly what one would expect to find in a ‘conventional’ 7 layer dip. All her seven layers work in perfect harmony, dancing on the tongue and pleasing the palate. 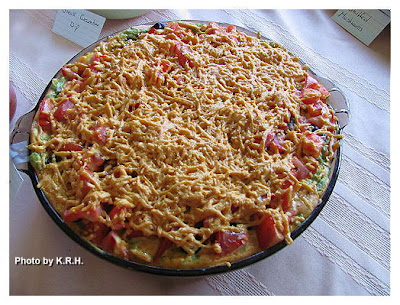 The best thing about this dish is that if you don’t tell an omnivore what’s in it, they don’t know the difference. That’s what I don’t understand about Omni’s who say they could never give up cheese. They can’t tell the difference between Daiya and real Cheddar at a party yet they still won’t consider even for a second giving it up. Since purchasing "The Kind Diet" I’ve made this dip for three separate parties and each time it has gone over big and I mean BIG! People just can’t get enough. They park themselves down in front of the dip and don’t leave until it’s nearly gone, all the while praising me, which Is why I think this is the perfect omni-friendly party dish.

The only major change I make with this recipe is in reducing the quantity, and I do that simply because I don’t have a dish large enough to house all of those yummy, creamy, deliciously overflowing layers. Generally I reduce the refried beans, and sour cream by roughly half. Use 2 avocados + 2 Tbsp of lime juice rather then 3, and everything else I keep pretty much the same. Although some days I may add in extra olives, tomatoes, or Daiya depending on how I feel.

As far as products that I use go - I always use Toffutti’s ‘Better Than Sour Cream’ for the sour cream layer. Up until recently that was the only commercially available vegan sour cream in my immediate area. However it is a really good product and even though I now see other products emerging I will probably still continue to use it. I always buy an organic taco seasoning blend because I don’t want all those added ingredients that I can’t pronounce, and so far the organic brands are the only ones I’ve found around here that are totally dairy free. Watch out for that because a lot of taco seasoning contains casein which is a dairy product. Why it’s in there, I have no idea. Then of course for the cheese layer I use Daiya Cheddar Style Shreds. So far that’s the best vegan cheese I’ve tried, and I’ve tried quite a few. It’s both soy and wheat free which is a bonus to anyone with allergies, and to me it tastes pretty accurate, like a milder less pungent cheddar. It also melts, however I’ve noticed unless you’re cooking it for a long time or at a high temperature it does take a little while to melt. So keep that in mind when you make the dip, you may want to up your oven temp or you may want to leave it in longer. I generally leave it in 10-15 minutes longer then the recipe says. Unless I’m impatient like I was in the above picture. You can clearly see that the cheese there is only semi-melted. *shrugs* It still tasted great, so great in fact that I forgot to take a picture after some had been eaten away. So unfortunately in these pictures you don’t get to see all the layers but you do get the idea.

This has definitely become a very important go-to recipe for me when it comes to attending omni parties, and I’m sure if you try it out you’ll love it too!