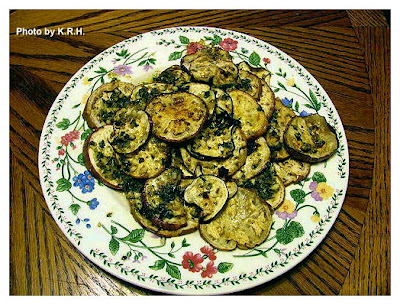 I know I’ve sort of dropped the ball on Vegan Mofo the past couple of days, and I apologize for that. I’ve just been so much more exhausted then I expected to be, and the adjustment from two weeks of lush tropical beauty and relaxation back to the cold, dreary and hyper-intense Midwest has been a lot harder then I anticipated. On top of that the gods of technology have forced my hand into buying a new computer. My nearly 8 year old Dell has zero memory left, a broken disk drive, an inability to connect to Itunes, and a handful of other programs and just all around isn’t cutting it anymore. So I’ve been a bit preoccupied with that. I’ll do my best to make up for it by posting as much as possible for the remaining days of Mofo but no promises. I don’t want to make promises I’m not sure I can keep.

For the moment though I’d like to share with you a dish that I’m happy to say really surprised me. I know a lot of people who hate eggplant, and many more who won’t even dare to try it, so some of you may be skeptical upon first glance but trust me when I say to you this is like no eggplant dish you’ve ever tasted. I too I admit have never been a huge fan of eggplant. I’ve never despised it like some, it just simply wasn’t a vegetable I went out of my way to eat. It’s also one of those few foods I can only tolerate if cooked a certain way. (Usually fried in oil or brushed in oil and grilled) My husband however really likes eggplant, and since the picture of this recipe just looked so beautiful and tasty I could hardly resist making it for him.

Brushing eggplant and grilling it is almost always a win for me, but even so I was skeptical about this dish - which by the way is listed under the salad section, though I think it could just as easily be eaten as an appetizer, or a side dish - mainly because aside from the dressing eggplant is the only thing in it. Too me that just seemed like too much eggplant. The surprise is that it’s not. It may sound crazy and ridiculous when I say the eggplant in this dish is not overpowering, but it really isn’t all thanks to the wonderful zesty salmoriglio dressing. 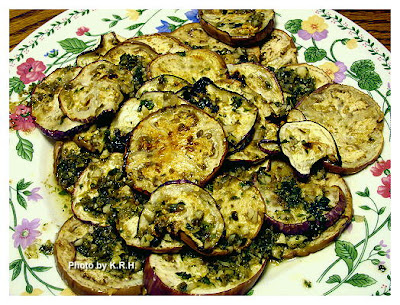 The salmoriglio truly steals the show. Full of simple ingredients and quick to prepare it’s absolutely divine. It’s got that fantastic tang of lemon, a perfect combination of garlic and parsley, a meager hint of sweet, and that almost sour briney bite that is so characteristic of capers. When poured over the eggplant and left to marinate for a while each slice of eggplant becomes infused with this tantalizing combination. It’s all you can taste in every bite, and each bite will no doubt have you ooing and awing and begging for more until the plate’s been cleaned.

If you like garlic as much as I do then I recommend adding in a bit more to your liking, otherwise the dressing is perfect as is. I also strongly recommend that you let the eggplant marinate for the full 30 minutes suggested in the book, but that if you have more time to marinate it longer. The longer you marinate the eggplant the more profound the flavor will be, and I would suggest marinating for one or two hours total. It is well worth the little bit of extra time, and as long as you’re prepared and organized the extra marinating time won’t interfere with the rest of your dinner or your day. As always enjoy, and please, even if you’re skeptical about the eggplant consider giving this dish a try and you might just change your mind.