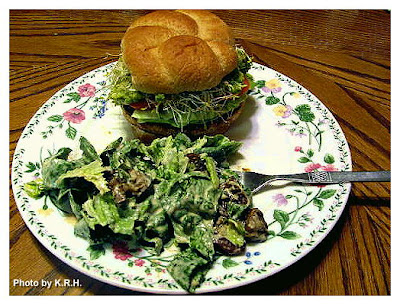 Caesar Salad is one of those dishes that seems to be universally loved. Everyone and their grandmother loves a Caesar salad, and everyone’s got their own perfect recipe or way of preparing one. Every North American or Mediterranean style restaurant you walk into seems to have it listed under their salad section, and most restaurants offer it as a side in place of their ‘House Salad’ It’s probably the single easiest way to get a kid to eat something green. However at this point the people’s love of Caesar seems to go far beyond it’s use for salad. I see people dipping their fries and baked or broiled chicken in cups of Caesar dressing. I see people pour it over potatoes, smear it on burgers, drizzle it over pizza or simply dunk their pizza into it. I see people poke bread sticks into it and mix it into rice. People it seems have gone Caesar crazy.

Honestly I was no exception. I loved a good Caesar salad as much as the next girl. To me Caesar salad is summer in a bowl. It is the epitome of summer, always forcing its way onto the buffet table at parties, gatherings, Barbeque’s, and stowing itself away to picnic’s. And really, what better example of summer could you have then a full plate containing a burger, fries, grilled corn on the cob and a nice hearty pile of Caesar salad? It fits right in, and makes you feel at home. The dressing is rich and creamy. It’s tangy and almost sour but a little bit sweet, and gives you a wonderful mouth feel when combined with super crisp romaine. A person’s mouth could water just thinking about it.

My mom made a lot of Caesar salad during the summers when I was growing up. She made a wicked good Caesar too, and all of us would devour it. Eventually she started making huge almost industrial sized bowls of it to accommodate our insatiable appetite for it, and more often then not it still wasn’t enough. It was definitely one of my favorite things to eat growing up. Yet over the two years before I went Vegan, it wasn’t something I ate much of. I don’t really know why, I wasn’t going out of my way to avoid it or anything but I guess I had kind of lost my taste for it. As I got older Caesar became one of those things that I still loved, but could only handle in smaller quantities. Something about that dressing just made my mouth ache, and my stomach bloat, and if I consumed to much I often felt very lethargic and kind of ill afterwards. So when I went Vegan I didn’t worry myself about finding a vegan Caesar substitute, it had never crossed my mind. Then I got my hands on a copy of "Appetite for Reduction" and there in the salad section was a Vegan Caesar. 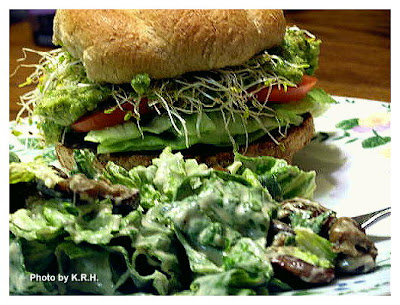 Now I hadn’t thought about Caesar salad in a long time, yet seeing that recipe just got my mouth watering and my memory bank flowing. I remembered all those great summer moments, all those barbeques, and picnics where Caesar was prominently featured and I wanted to enjoy that again. I wanted to have that traditional barbequed summer dinner again, and I wanted to take pleasure in an old comfort. Honestly I wasn’t sure what to expect. The list of ingredients sounded strange together and I just couldn’t imagine them being comparable to an omni Caesar salad, but I kid you not, this is the best vegan Caesar salad I’ve ever eaten, maybe the best Caesar salad period. It tasted exactly like what I remember Caesar salad to taste like. Rich, creamy, and tangy, and the best part? Not only does it not contain any dairy ingredients but there are also no anchovies! I don’t know if you know this but traditional Caesar salad dressing whether it’s store-bought or restaurant made contains either anchovies or anchovies paste. Ew! Right? Anchovies are not something I would have ever eaten as an omnivore, and growing up I had no idea they were the secret ingredient that gave Caesar salad it’s characteristic tang and flavor. I think a lot of people are ignorant of that fact, and it’s something I found very disturbing when it was eventually revealed to me. So no ground up fish in your dressing, yay! What Isa uses instead are capers, miso, lemon juice and Dijon mustard. Mixed together with her other dressing ingredients this combination makes the most Caesary Caesar ever. I also love the fact that she doesn’t include a vegan Parmesan substitute like so many other Vegan Caesar recipes. In this dressing it’s really not needed.

Now as if I haven’t gushed about this salad enough the recipe also includes a batch of eggplant bacon which is absolutely divine. She uses very few ingredients and the technique is super simple but the flavor is powerful and when tossed into the salad you can hardly tell the difference. Between it and those terrible little processed ‘bacon crumbles’ people always use.

So if you love or loved Caesar salad I strongly urge you to give this one a shot. Like I said it’s the best I’ve had, and I don’t say that lightly.

PS: I forgot to take a picture of the salad on it’s own, but you get the idea here I think. I’d paired it one lovely evening with a delicious veggie burger that I’d topped with homemade guacamole, romaine, tomato, onion, alfalfa and agave sweetened BBQ sauce. Delish!