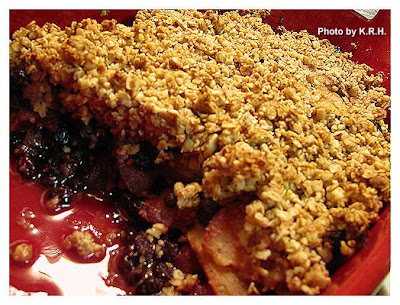 Who doesn’t love a crisp? They’re so warm, gooey and soul satisfying. The perfect sweet treat to accompany a hearty yet simple autumn or winter dinner. Apple crisp always seems to be the popular favorite, it’s the one with which people are most familiar, but I love inventive and creative crisps that use a variety of ‘non-traditional’ fruits and pairings. So when I saw this recipe in Clean Start I was immediately drawn to it. I love plums, and yet had never thought to use them along with currents in a crisp before. Even though this recipe is listed under the ‘Summer’ section of the book when plums began flooding my local groceries here in mid September I promptly bought up about four pounds, and the first thing I did with them was set to work on this crisp.

My husband is not a huge lover of plums, stone fruit in general I think don’t quite catch his fancy. So I wasn’t sure how he’d feel about this crisp, and I suppose to tell the truth I wasn’t sure how much I’d like it either. What with the seemingly strange additions of coconut oil, currents and almonds. Turns out neither of us had to worry, the crisp exceeded all of my wildest expectations. It was moist, gooey, well spiced and delicious. It had everything you could possibly want in a crisp and no one flavor shone more brightly then another. It was a perfect marriage of late summer early autumn flavor. 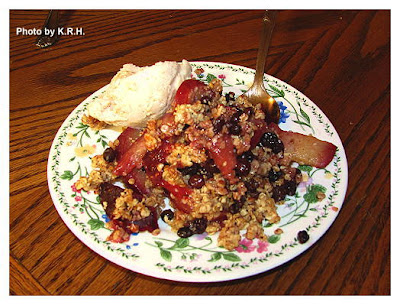 I was however forced to make one change to this recipe. I did not have teff flour on hand and wasn’t in the mood to drive out and buy some. So instead I used extra Almond meal, and rolled oats to replace the teff flour. You can do the same though if you’re gluten free make sure you get gluten free oats. Taste wise it was delicious and I’m fairly certain I wasn’t missing anything by neglecting to use teff flour. Also a wonderful idea is serving this crisp alongside a large scoop of Vanilla Almond Milk Ice cream. Mm-mm....
Posted by Kyleigh at 9:32 PM